The first step is to make a chirp, which is just a type of pulse that changes frequency (see Figure). The audio speakers I have can only make pulses up to 20kHz (I think?), so I make chirps that vary between around 4kHz and 16kHz. I used Labview software to program the chirp and make it come out of my speakers.

The equation for this chirp, C(t) is a function of the pulse length T as well as the minimum and maximum frequencies in the chirp f_min and f_max. Typically I would choose a pulse length of T=2 milliseconds and f_min=4kHz and f_max=12kHz. The first part of the equation with the exponential is just an envelope function that prevents the frequency content from leaking into adjacent frequencies. The equation is:

Once we have a chirp coming out of the speakers, the next trick is to process the recorded audio that is coming in through the microphone. There are many ways to do this. I chose to use a matched filter. The idea is that whenever the microphone picks up a chirp that matches the one I sent, it makes a spike. This trick (matched filters) is used in radar all the time. The math for turning the microphone recording R(t) into a useful sonar signal S(t) using a matched filter is:

The final step is to keep making chirps (my program could make around 4 per second) and then plot the intensity vs distance vs time (yes a 3D graph on a 2D plot!). To do this, I made an intensity graph, where height represents distance away in the reflection, and the time scrolls horizontally. I was holding a sound-reflecting clipboard, and walked away around 3 meters, and then returned to the computer. You can see that as a high intensity reflection going vertical on the graph (far away) and then closer. 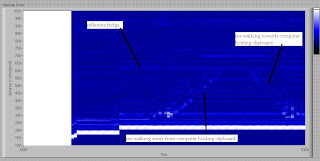 John and I have some fun ideas for improving our sonar, I will keep the world updated as we make more improvements! I would be happy to hear if you guys have some fun ideas for improvements! I did all the signal processing and speaker output using Labview software. I am happy to give you the source code if you are interested.
Posted by Bob Lansdorp at 1:30 PM